PSI is experimenting with various indoor and outdoor security system configurations based on the concept of a ground-based sensor mat with a configurable layout that detects intruders entering or crossing a monitored area. Fibre-optic cable is contained in the mat and any disturbances are electronically processed to determine their nature and location. False alarms are minimal due to advanced signal processing techniques that distinguish footsteps from wind and falling debris. Genuine alarms are flagged and an alert SMS is sent to one or more mobile phones with the system name, GPS coordinates, date, time and type of alert. If required the system can also set off a siren and blue flashing light to deter intruders.

The market pain SecureMat sensor mat systems are addressing is that the currently available outdoor security systems are prone to false alarms, leading to the “cry wolf” syndrome where security firms experience so many false alarms that they risk either responding slowly or not responding at all to genuine alarms and intruders therefore being able to evade detection. There are also high costs associated with sending security patrols to investigate each and every alarm that is triggered. At the same time, the costs of theft from yards and construction sites and damage caused by vandalism are increasing.

Because the outdoor system uses hardwearing plastic mesh with fibre-optic cable woven through it that looks like the type of mesh that is commonly used by gardeners and landscapers it is not immediately apparent to intruders as a security product.

Inside factory and warehouse buildings it is a similar story. The mesh containing the fibre-optic cable is encased in a heavy-duty industrial floor mat. Because the product does not make its presence immediately known as a security product it is ideal for covert security operation.

Positioning the sensor mats on the ground inside a fence rather than on the fence means that if an alert signal is received it means that an intruder has definitely breached the perimeter, contrasting favourably with on-fence systems where disturbances outside the perimeter caused by people leaning on, touching or shaking the fence can set off alarms. 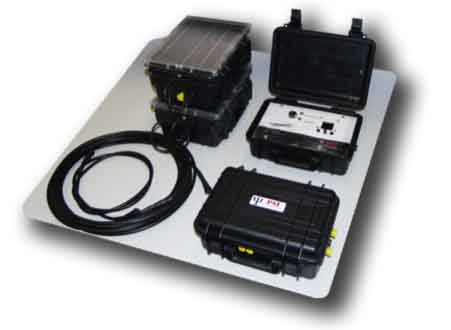 As well as the mats, the system comprises an electronics package with a standard controller, a gamma sensor, a 240 volt battery charger, two metres of six-pin SMN cable, 10 metres of six-pin SMN cable and a 12-volt battery box. Optional extras are a standard 18 amp hour battery box with solar panel, a switch box for doors, gates and openings and a flashing blue light and siren for visible and audible deterrent effect.
SecureMat configurations

The SecureMat system can be configured to protect a single gate or doorway or a perimeter of 100 metres or scaled up to protect a perimeter measuring one kilometre. It is simply a matter of adding more mats and sensors in the ratio of one sensor to four mats. For example, a perimeter of 300 metres would require three gamma sensors, 12 sensor mats and one standard controller and so on. The electronics are contained in black boxes that are each about the size of a small briefcase. There is a set of electronics for each section of mat and each electronics box has its own controller box. The system needs to be connected to mains power, so a nearby connection point is required. Alternatively, the system can be supplied with batteries and solar power (see diagram).